A roar of passion and pleasure fills the evening sky over Nairobi. Kenya has scored yet another touchdown. Its the 7s – game on! The thunderous acclaim from thousands of enthusiastic supporters is of course aimed at the Kenyan Rugby team which is the host of the annual 7s Rugby tournament in Nairobi known as the 7s or Safari Sevens (previously Tusker Safari Sevens).

Even if rugby means nothing to you, the weekend long event is one worth exploring. 7s rugby in Nairobi is more a merger between a street party, a carnival and a local football derby. Thousands of Nairobians flock to the venue of the 7s rugby face painted in Kenyan colors, dressed in the colors of the Kenyan flag and ready to party all weekend long. 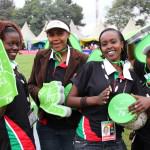 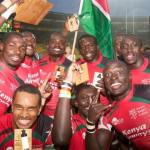 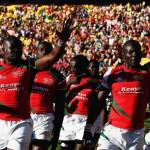 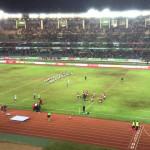 The venue changes from year to year. For a couple of years the Nairobi sevens has been held at the Safaricom Stadium Kasarani (aka Moi International Sports Centre) but there are talks that it will return to its previous home RFUEA Grounds Nairobi where it was held with great success up until 2010 or to Nairobis Nyayo National Stadium that hosted the weekend event in 2011 and 2012.

The venue for the 2016 Safari Sevens in Nairobi is yet to be announced but basically,when the time approaches you wont be in doubt. Posters will be all over town, newspapers and banners will advertise it etc. The reason for the change of venue is that even bigger crowds are expected to attend if the 7s is moved from Kasarani to a stadium closer to the city center, but no worries, where ever it is held you wont be lacking for company on the stands.

The Safari Sevens in Nairobi will be held from 03 October 2016 to 04 October 2016. The pricing tends to be around 1000ksh for a day pass with a slight rebate for doing both days. When the time approaches you can buy tickets at any Safaricom shop – beware that you usually cant buy tickets at the entrance.

The Sevens rugby tournament seems strike a welcome balance of party and national pride in Nairobi. Everyone arrives in high spirit and cheers on the Kenyan rugby teams. Yes, Kenya has an excellent female rugby team too that tends to compete for the medals at the female Safari sevens held at the same time and place with matches mixed in between the mens games.

Outside the stadium you will find all the heart could desire of food stalls, bbq outlets, rugby fan gear shops and of course bars. Its the done thing to venture to the sevens with friends and family, have some food, plenty of beer and otherwise simply sing, dance and yell the weekend away. So even if youre just visiting Nairobi or new in town, by all means go and enjoy it – the Nairobians are extremely welcoming and will happily include you in their party … if you serve your fair share of beer rounds of course ! 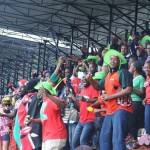 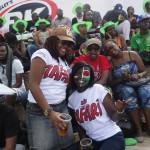 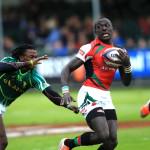 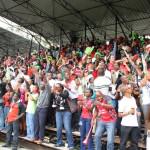 Well, truth be told I know nothing about rugby. But it is an amazing feeling to be part of 10s of thousand strong roar of approval as a Kenyan player picks up the ball and speeds off towards a touchdown. That aside, it really doesnt matter too much if the Spanish rugby team beats Uganda or the Welsh Warriors run away with it all (unless that includes the female Kenyan team too).

Besides, despite being sponsored by the biggest communications company in Kenya – Safaricom – it is actually next to impossible to follow the score or rankings of the team as such trivial details are not projected on the big screens. So instead, simply get your face painted in Kenyan colors, buy a six-pack of Tusker and go party with new or old friends at the Nairobi Sevens.

For more information check out https://www.kenyanmoments.com/safari-sevens-nairobi-2016/